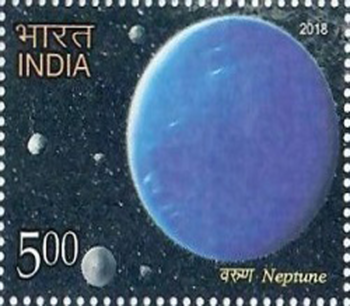 Neptune is the 8th and farthest known planet from the Sun in the Solar System. It is the fourth-largest planet by diameter, the third-most-massive planet and the densest giant planet. Neptune is 17 times the mass of Earth. Neptune orbits the Sun once every 164.8 years. Like Jupiter and Saturn, Neptune’s atmosphere is composed primarily of hydrogen and helium, along with traces of hydrocarbons and possibly nitrogen, but it contains a higher proportion of “ices” such as water, ammonia, and methane.